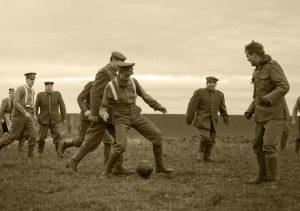 At Christmas 1914, four months into World War One, British and German soldiers on the Western front laid down their weapons. They exchanged small gifts, sang carols, buried their dead, and some even kicked a football around. Thus they created what became known as the Christmas truce. In his diary, one soldier called it “a day unique in the world’s history.”

That “little peace” was brief, yet what is captured of it in soldiers’ letters and diaries makes amazing reading. In this programme, Nelufar Hedayat hears accounts of men who were there, and what their experiences mean to their grandchildren and great-grandchildren today. She finds out how children respond as they hear the story for the first time, visits the place in Flanders where the Christmas truce took place, and separates fact from the myths that have grown around those events in 1914. And she is in the stands at an international youth football tournament in the Belgian town of Ypres where 11-year-olds from both sides are recreating the kick-about on the battered land above the trenches.

This award nominated programme marks the 75th anniversary of this event.