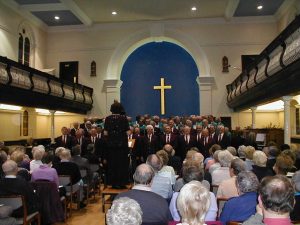 The concert was well attended and a good time was had by all.  As well as profit from ticket sales, the HRB team were also out in force handing out magazines and encouraging the audience to hand over any loose change.

The total amount of money raised from both ticket sales and the tin collection was £654.72.

The concert was recorded by HRB and can be heard at various occasions on air.