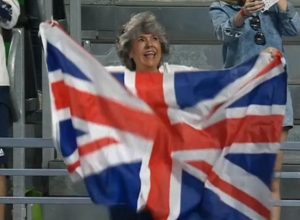 Rosemary Head has just spent 2 weeks volunteering at the Rio 2016 Olympics and appeared on Neil Ogden's Sound of Sunday to talk about her experiences.

Rosemary, who also volunteered at London 2012 and is also a Park Champion at Queen Elizabeth Olympic Park, talked about meeting Nicola Adams and flying home with Usain Bolt.  She siad that many of the problems that were talked about before the games did not really exist once everything got underway and she had a fantastic time working in the athletes village.

Rosemary also chose this week's Sainsbury's Draw winner – number 8 who was Bob, a patient on CCU.  Bon wins a goody bag as donated by Sainsbury's at Liphook.