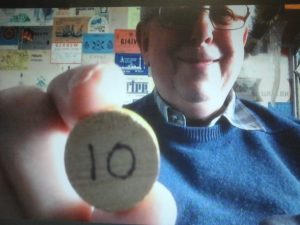 Another Sainsbury's Draw took place at the weekend.  Everyone who had a request at the weekend was given a number and on Sunday afternoon, Paul le Feuvre drew out number 10 from the bag of balls.

It belonged to Colin on D1 who won himself a goody bag as donated by Sainsbury's at Liphook.

It was also the second week in a row that number 10 had won!  Definitely a lucky number for Colin.