It's official – Christmas has officially started on HRB.

The first Christmas programme was Neil Ogden's Sound of Sunday Christmas Show at 12pm on 11 December.  The show was a 6 hour mix of special guests, competitions and requests. 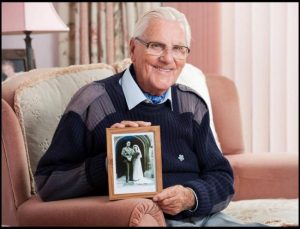 First up there was Bob Lowe. one of the inspirations behind the charity Silverline.  We talked to him about his involvement in the helpline for older people and his chat with the charity's founder Esther Rantzen which can be heard on New Year's Day.

Then we talked to outgoing Chief Executive of the Hampshire Hospitals NHS Foundation Trust.  She talked about the challenges she has faced in 13 years in the job, but also that she is still hopeful that the Critical Treatment Centre will still be built despite being put on hold last year.

There was Sarah Jane Buckley and Ben Harlow from Sleeping Beauty at the Anvil and Sharon and Tony from the hospital panto.

But most importantly. Roger Scott, Mel Montagnon and MArk winwood went around the wards pulling crackers with patients and staff getting instant requests played on air. 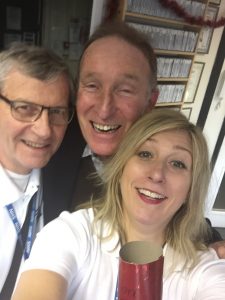 Our competition to win 4 tickets to The Anvil panto was won by Leah who works on E floor and we had a double winner in Del Boy on C Floor who not only won the Sainsbury's prize this weekend, but also the Brain Teaser too.

Many of the 68 requests played were for the residents of Basingfield Court Care Home who joined in for their part of the show from 4pm.

A good time was had by all and it all means that Christmas is now well and truly underway at HRB!