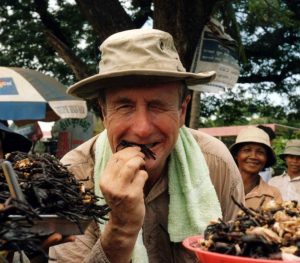 Blue Peter Director/Producer of nearly 40 years Alex Leger joined Neil Ogden on the air at the weekend to talk about the show at the end of its 60th birthday week.

Alex first appeared on The Sound of Sunday in July last year after the death of former presenter John Noakes and was at the 60th birthday show broadcast from Salford on Tuesday.

Alex worked on nearly 700 Blue Peter films including that climb up Nelson’s Column and still keeps in touch with the show today – when current presenter Radzi Chinyanganya did his parachute jump last year, he wore an orange jumpsuit thanks to the advice received from Alex about how to film it.

Alex talked about his Blue Peter memories and behind the scenes gossip about the big birthday show which featured many of those who have been Blue Peter Presenters since the show started in 1958.

Alex follows other Blue Peter guests current editor Ewan Vinnicombe and Blue Peter legend Peter Purves as well as Mark Curry and Peter Duncan who have been heard on The Sound of Sunday over the last few months.  A compilation of all the interviews will be on HRB at Christmas.