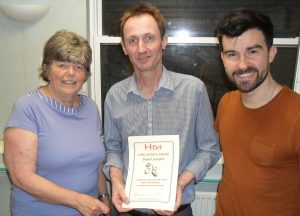 HRB's Dave Leonard has been awarded a long service certificate by the Hospital Broadcasting Association for 35 years of service to Hospital Radio Basingstoke.

Dave, who currently presents on a Sunday morning, joined the station when it was known as CMMR back in 1981 and was presented with the award at HRB's AGM on 13 March.  HBA President June Snowden visited the station to present the certificate along with the nomination certificates for the stations 5 National Hospital Radio Award nominations.