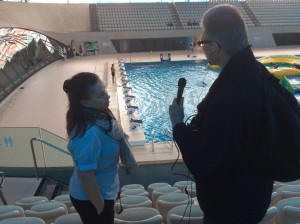 2018 will be the first time since 2012 that 27 July has fallen on a Friday.  That was of course the date of the opening ceremony of the London 2012 Olympics, part of an unforgettable summer.

It was also the date where 3 years later, The Sound of Sunday's Neil Ogden conducted the last ever media interview at an official event on the original running track.

Nowadays, the London Stadium is part of Queen Elizabeth Olympic Park and two years ago The Sound of Sunday broadcast live from the park for its 1000th show.  On Sunday 29 July, there'll be another chance to hear the highlights of that show.

The message is still the same – the park is still very much open for business and open for millions of people who go and see it every year.  You can swim or cycle at the Olympic venues and see a fantastic view of London at the top of the Orbit (before sliding down the slide).