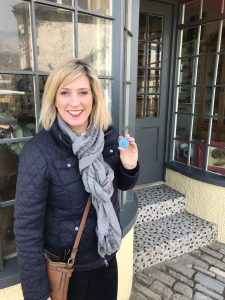 Drawmaster Mel Montagnon was out and about for this weekend's Morrisons prize draw and picked number 1 out of the Bag of Balls to be the winner of a Morrisons goody bag.

Mel was in Lyme Regis where apparently Kate Winslet was filming her new movie a few weeks ago.  The winning number belonged to James on CCU who received his prize on air during The Sound of Sunday and chose Bing Crosby as a request.