Out and About at the Basingstoke Carnival Parade 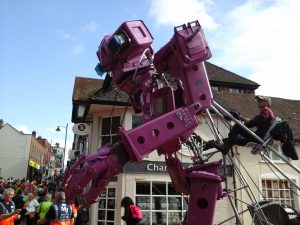 Over 500 colourful performers along with giant puppets and walkabout acts brought the centre of the town to life – and despite what the weather forecast had said, the sun shone too!

Local schools, choirs and dance and community groups were joined by professional artists and the crowds came out in force to watch as the parade made its way from Cross Street to Eastrop Park.

HRB was there to bring the event live to its listeners in a special 90 minute show.  Neil Ogden and Payge Aitchison were the presenters talking to some of thos that were taking part and describing what was going on.  It was a great afternoon and a fitting start to three weeks of events around Basingstoke, that will culminate with Basingstoke Live in July.