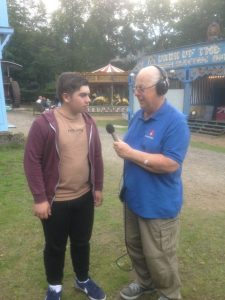 Paul Le Feuvre was out and about again last weekend for the weekly Sainsbury's Draw.  He went along to the Hollycombe Steam Fair at Liphook/

Situated on the Hampshire and Sussex border, Hollycombe is described as a place where where the past comes to life, from the atmosphere of the traditional fairground, to riding on the steam railways, or wandering through the woodland gardens.

Paul roped in Sam, another visitor to the fair to pick the number and he chose number 23, which belonged to Ted on Cardiology.