It was presented by the Hospital Broadcasting Association's Southern Regionn Rep Neil Ogden at a regional gathering in Guildford on 12 May.

Paul was one of the founding members of Radio Treloar in Alton until it closed when the hospital closed.  He then continued broadcasting a popular Sunday evening request show on the local commercial station Delta FM before joining Hospital Radio Basingstoke where you'll hear him presenting shows covering outside events such as the Alton Classic Car Show. 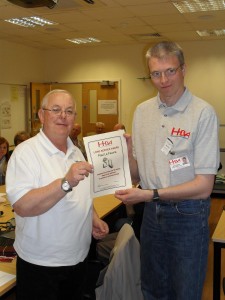