A Weekend of Strangeness lands on HRB

Back in 1987, Trev Neal and Simon Hickson made their debut entertaining the nation on Saturday morning TV.  There they stayed for 10 years, but 30 years on they are still writing and performing together tna for the last two years have been producing a 6 part podcast called Strangeness in Space.

Strangeness in Space is a comedy sci-fi audio adventure for adults and children alike. It was listed amongst The Guardian’s “50 Podcasts You Need to Hear” and has been nominated in the Audio Verse Awards. 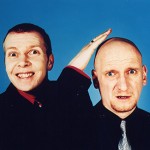 The series is entirely crowdfunded and the season finale part 6 was released in September.  The series stars Trev and Simon along with Sophie Aldred plus plenty of guest stars including Rufus Hound, Paterson Joseph, Katy Brand, Sylvestor McCoy and Sarah Greene.

The series is free to download from www.strangenessinspace.com but the team behind the show have given permission for hospital radio stations to broadcast it – and over one weekend in October, that is exactly what will be happening on HRB.

It starts with episode 1 at 8pm on 20 October and concludes on the Sunday afternoon.

Don't miss a weekend of strangeness on HRB later this month!