HRB's longest serving member was surprised on air by hospital Chief Executive Mary Edwards who came along to present him with his long service award for 25 years of membership of Hospital Radio Basingstoke.

Dave joined the station in July 1981 when it was known as CMMR and was one of the founder members of HRB when it came on air in 1984.

The following article appeared in the Basingstoke Gazette on Thursday 27 July 2006. 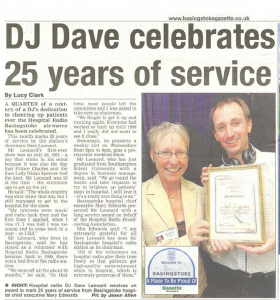