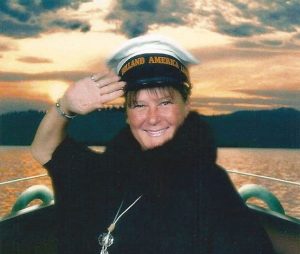 The daughter of one of the most popular entertainers on the international music scene during the 1960s and 1970s, Matt Monro, will join Neil Ogden on 22 March as the special guest on The 29th birthday edition of The Sound of Sunday.

Known as The Man with the Golden Voice, he filled cabarets, nightclubs, music halls, and stadiums across the world in his 30-year career, described as “one of the most underrated pop vocalists of the ’60s”, who “possessed the easiest, most perfect baritone in the business”.

His recordings include the UK Top 10 hits: “Portrait of My Love”, “My Kind of Girl”, “Softly As I Leave You”, “Walk Away” and “Yesterday” (Originally by The Beatles). He also recorded several film themes such as “From Russia with Love” for the James Bond film of the same name, “Born Free” for the film of the same name and “On Days Like These” for The Italian Job.

Michele Monro will be talking about life growing up in the Monro household, the occasion her father took part in the Eurovision Song Contest in 1964 and the brand new album of unheard recordings that were made in 1967 and that are being released this month.

Michele will also be revealing HRB’s 110,000th request to be played.

Michele Monro on The Sound of Sunday, 22 March from 1.30pm