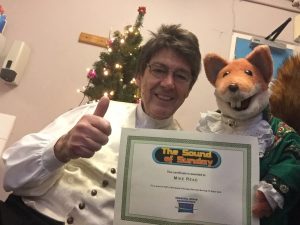 Radio and TV presenter Mike Read got a surprise when he appeared on The Sound of Sunday Christmas Show.  9 years after his last appearance he was promoting a Christmas charity single recorded by Basil Brush in aid of The Shooting Stars charity and to talk about being in panto in Windsor.

But at the same time, Basil presented Mike with a certificate and HRB mug after he got 100% in the Saturday Morning TV SuperQuiz, a competition held over 10 years on the show with some of the most well-known names of Saturday morning TV taking part.

Mike got 100% alongside Trev Neale of comedy duo Trev and Simon and Andi Peters, who presented Live and Kicking.

Presenter Neil Ogden said he would like all three of them to re-appear at some stage to find the Champion of Champions but joked that as it had taken Andi 10 years to make it onto the show, it might be a while away.

Basil Brush's version of White Christmas is available now and Mike and Basil are in panto in Windsor until 6 January.