On Show in Festival Place 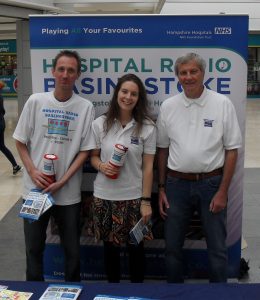 HRB was out at Basingstoke's Festival Place on 15 October promoting the station and collecting money from those walking through.  The team, including Dave Leonard, Rita Matasinhos and Roger Scott (pictured), were situated in Porchester Square and outside Iceland.

Thanks to everyone who came and chatted and gave us money.

The total we raised was a fantastic