Hospital Radio Basingstoke has reached the milestone of 100,000 requests since it started counting in January 1984.

The big request was played on Thursday (14 September) by Mel Montagnon, and was The Last Waltz by Englebert Humperdinck

The patient who requested it was Melva who was on D1 and she was presented on air with a big hamper of goodies that had been donated by BidFood in Reading. 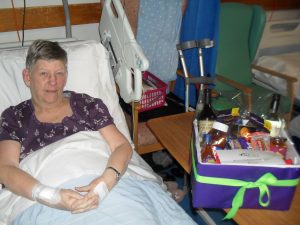 HRB plays around 70 – 100 requests each week and the milestone request was one of over 25 on this night played by presenters Terry Green and Mel Montagnon.