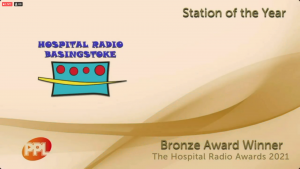 HRB has won the bronze award in the Station of the Year category at the National Hospital Radio Awards 2021.

It’s the second time in 3 years that the station has won the award with the judges saying this time they liked the interaction with the listeners and the recognition of the milestone request.

The awards were held virtually on Saturday evening at the end of the Hospital Broadcasting Association’s annual conference which was held virtually, to celebrate the thousands of volunteers who have worked over the last year to keep hospital radio stations on the air.