On Air Surprise for David and Steve 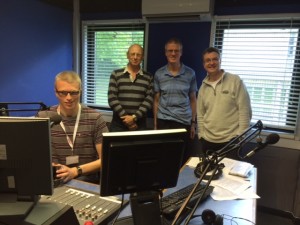 When Graham Seaman was a member of hospital radio in Basingstoke, the station was called CMMR and the hospital, the Basingstoke and District Hospital.  Graham left the station and went on to spend 10 years in commercial radio before joining BBC Radio Wiltshire 25 years ago where he still works.

When he presented a seminar at the recent hospital radio conference, Neil Ogden invited him back to come and see the station, and suggested that the occasion of David Blower and Steve Fox's next show might be a good day, as they knew him back in the late 70s and early 80s.

So as David and Steve were playing a greetings meesage recorded by Graham in Bristol and busy explaining who he was, Graham was being smuggled in the fire exit and into the studio.

Graham hung around for the whole of the show, remembering his time at the station, and at the end of the show, Neil presented him with a DVD recording of the last time he was there – the occasion of the 21st anniversary of the start of hospital radio in Basingstoke in April 1993.