Starting on Friday 5th April 2002, our Chairman Dave Leonard attempted to break the world record for the longest continuous broadcast by one person.

Unfortunately we had to call a halt to the show after 44 hours and 12 minutes.

A great achievement nonetheless and thanks to Dave from all of us at HRB for helping us raise a total of…..

Also thank you to all the many people who helped us with this record attempt, in particular Dr David Robbins who arranged medical cover for the entire weekend.

Our world record attempt started as planned at mid-day on Friday 5th April, although with the events going on in London, the first hour was quite somber and laid back.

Meridian TV came and filmed the start and Chairman Mike and Ex member Steve Fox joined in on the phone.

We linked up live with BBC Radio Berkshire just before 2pm, and just after 2, the Chief Executive of the Hospital Mark Davies joined us live for a chat.

Chris Marsh-Jenks & Louise Carstens from Customer care joined in at 2.30.

After 4 BBC Southern Counties Radio in Guildford joined us for a live link up and just before 6, BBC Radio Solent.  We also received coverage on Kestrel FM and in the local paper, only 2-Ten FM decided that they couldn't feature us.

More members of the station joined in the fun in the morning collecting requests from around the wards.  We also set up "On Show" in the main entrance to tell people visiting the hospital all about the station and what we are doing.  A collection tin and bucket were also present to take any spare change (or notes) off people as they came through the reception area.

In the afternoon, coverage of the football and the Grand National  including John Gray reporting live from Gravesend V Basingstoke.

In the evening, and during the night, the phones went mad as we found new listeners on F Floor.  The competitions proved very popular.

After the busy night, things went a bit quiet around 5am.  Unfortunately, that was the time when Dave started to feel the tiredness and it was this, along with slight de-hydration that was the reason for the decision to end the attempt at 8.12am on Sunday morning.

Even so, 44 hours and 12 minutes is a great achievement and we did manage to raise over £900 from the weekend which includes sponsorship from local companies.

A final mention came on Sunday evening on Kestrel FM when Steve Fox gave the event a mention on his show, congratulating Dave on behalf of everyone at Kestrel. 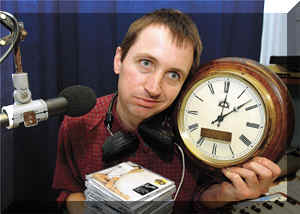 So well done to Dave and thank you to all the many people who helped us with this record attempt, in particular Dr David Robbins who arranged medical cover for the entire weekend.

Also thanks to everyone who wished us luck.  We may not have broken the record, but we did raise some much needed money to set us on the road to a new studio and we did raise our profile in the hospital again, something which was also much needed.