HRB Live from the Odiham Procession

It was the first part of a four-day event celebrating the 800th anniversary of the signing of the Magna Carta and Odiham's part in it.

HRb was broaddcasting live from the Odiham Village Parade on Friday 22 May.

Presenters Neil Ogden, Paul Le Feuvre and Jonathan Sawyer set the scene and talked to some of those who took part as they waled around the back of the Church, many in costume.  The parade was seen live on BBC One as part of a special edition of the regional news programme South Today.

Thousands of people gathered on the short route for the event, which took about 30 minutes to complete, before continuing to enjoy the side shows and entertainment. 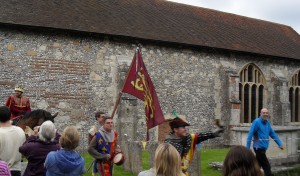