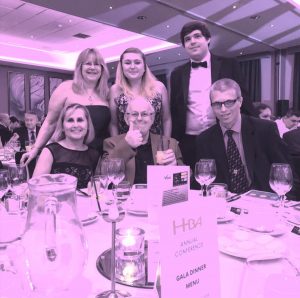 HRB has has achieved two top 5 places at the National Hospital Radio Awards 2018.

The event, which was held at the De Vere Beaumont Estate in Windsor on 24 March, celebrates the great work that thousands of hospital radio volunteers all around the UK do every week.  HRB had 5 nominations in the 11 categories.

The first top 5 was for the programme trailer for Sarah Beattie's Spooky Halloween Special, and the second was achieved in the Station of the Year, the second year in a row top 5 status in this category has been achieved.

Radio Brockley were crowned Station of the Year and given their award by Hospital Broadcasting Association Patron Alan Dedicoat at the end of an awards evening that also included appearances by the likes of Basil Brush and Ken Bruce.